The 45th president of the United States Department of the Interior has just short listed the Grand Canyon-Parashant National Monument for decommissioning.  It is on the list of natural treasures under review. Removing it from National Monument status would remove this region to toxic uranium mining. The uranium mining lease was actually entertained first by the State Department under the direction of Hillary Clinton, and was to be let to a consortium which included Russia.

There are so very many reasons to protest this move by our politicians , The awesome beauty is just a small fraction of those. And if your concept of what a uranium mine looks like is a shaft into the ground with all the workings hidden from view let me say you are wrong as the picture below indicates. And it does not go away when the mine is closed. Even the waste hauled out of the mine is radioactive and must be constantly washed with water to keep it cool. Water which goes into the aquifers below all western lands. It seeps through canyon walls and the sandstone and goes into the precious few rivers which cross the land.

I want to protest this move by the despot in office currently because of the water. As I have stated in this blog platform before the next war will be over water. It is a resource we cannot live without. And while there may be alternate sources of energy there is no alternative to water. Grand Canyon-Parashant National Monument is in the Colorado River watershed. What happens there drains into the biggest river in the southwest.

The water from the Colorado River goes into Lake Meade, a major water recreation area, and is used by Colorado for irrigation of its crops. Phoenix has built a canal to siphon some of this precious resource to mist its sidewalks. Ultimately it goes to the Gulf of Baja. We have a treaty with the Mexican government about the amount and quality of the water it receives from us via this international river.

Tailings from uranium mines retain 85% of the radioactivity of the ores which are mined. And uranium can have a half-life of 5,730 years. So it is possible, if this mine is allowed, that your strawberries will glow in the dark for millenniums.

This is about so much more than beautiful scenery or, if you will, just more red rock. This is about the water. Please protest this action by the Department of the Interior. 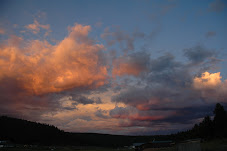 I came of age during the battle for open speech on college campuses and the fight to end the war in Vietnam. I was working for a United States Senator when Ohio State students were killed protesting that war. I have marched for equal rights for women and to save the mini skirt; for saving whales and the end of nets that kill dolphins. I believe the waste of water will be the next major issue keyed to our survival as a country and a species.

Not all I think is important is, but it is my point of view; a view molded by life experience and tainted because I am an artist living in a remote paradise where water is precious because it is still unpolluted.

JBinford-Bell
Black Lake, NM, United States
I am an artist & poet living a life long dream with my own studio in the mountains of New Mexico until Covid-19 and the governor closed it down.

All text and photos bear the Creative Commons Copyright 3.0. Any use of the text or images on this page is forbidden without prior written consent of J. Binford-Bell and Lunacy Limited LLC. Just an artist that wants to own her own creativity.